Wow, it’s been a long time since the last update 😀
Anyway, here’s a little step-by-step progress in creating a character concept.
I did this as part of a digital painting workshop I gave last year.
It took an afternoon from sketching a few shape doodles to find an appealing basic shape to the finished, rendered “Space Miner”.

So what we did was starting here: 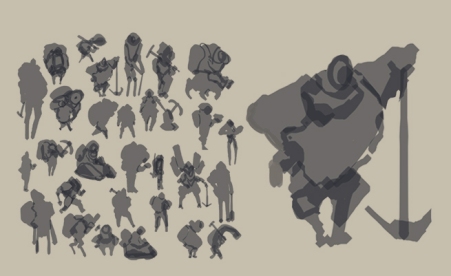 Note that this is in no way “the right way” to digitally paint. My work is flawed in lots of places and there are different approaches to render digital 2D works. But, well, this is mine 🙂
Hope it helps!

My impatient self likes the idea of <60 mins. paintings 😀

If you are new to “concept art” or production design this might be interesting for you.
Brace yourselves for some non-native english and more words than pictures.
Concept art is not illustration. Those top images on art platforms like artstation.com are in most cases beautifully rendered illustrations that got polished over days or even weeks.
Illustrations usually are rendered to perfection to be enjoyed by the final consumer, while you should prepare to throw away most concept art doodles you did when you are merely part of a production.
It’s about producing quick doodles and designs and refine those until you have a foundation for those beautifully polished illustrations, 3d models or costumes.
I struggled myself for a while producing a lot of doodles instead of following the 2nd or 3rd idea through and getting lost in rendering what’s actually an illustration. Which can be explained by me coming from illustration and the reluctance to “throw away” most of your approaches that a lot of artists show.
What really helps in enjoying this process is aleatorics.
You can avoid the risk of falling into usual approaches f.ex. to forms or silhouette by going crazy with random brushes or symmetry drawing apps/plugins and rather start to interpret random results. Or at least embrace a certain mount of randomness that might bring in new, fresh ideas.

On a train ride I did a bunch of doodles using an ipad and a stylus for
spacesuits / robots.
(Further down you’ll find a link to what I used in detail)

When you quickly, roughly doodle with a symmetry function, there’s a good amount of randomness involved
that might ideally lead you to cool ideas you haven’t expected. It also puts a lot of fun and adventure into painting/drawing because you just make shit up as you go. Like playing with legos when you were a kid and made do with the bricks you just happen to grab from the box.
That in itself was aleatorics that led you to crazy new ideas while following a basic plan.
For example building / designing a robot.
With a bit of practice you should be able to do dozens of these doodles on a longer (2 to 3 hour) trainride.
I made a selection of silhouettes and threw away a few that really didn’t work before I put them together.

Some ideas just happened by accident, for example the flying-insect-like droid thing with what might be sun collector wings like you see on satellites. Then my mind directly wandered off to images of NASA employing these things as sun powered repair droids. I’ll definitely follow that idea later.

Once you have a silhouette / basic design you like you might do a mid-level concept as a follow-up with some color and moody lighting. Note that this shouldn’t go too far timewise if you are doing concept art in a project. Always be prepared that somebody MIGHT kill the idea before it becomes a finished, polished asset for the final user. Be it because of design issues, technical limitations or marketing reasons.

I picked this silhouette for a next-level step…

…and put in some coloring and feel for the metallic, sci-fi material in around 40 minutes.
Later I added some lighting and some dust around it to put it into a very basic environment mood.

What did I use?

I used an Ipad Mini along with the Sensu Artist Brush (using the stylus tip), although I’d recommend the Maglus Stylus. I didn’t have that with me on that weekend but I like it more. The brush tip on the sensu is pretty unnecessary on an ipad that lacks the precision of professional drawing tablets.
https://itunes.apple.com/de/app/symmetry-drawing/id878569046?mt=8
is the symmetry drawing application for IOS that I used.
Its usability is a bit awkward but you’ll get used to it.
It’s cheap and very effective for symmetrical doodling.

Not sure yet if I’ll follow any of these sketches through.
It’s been fun though to sketch out some Character poses / designs just using a diamond shaped brush. 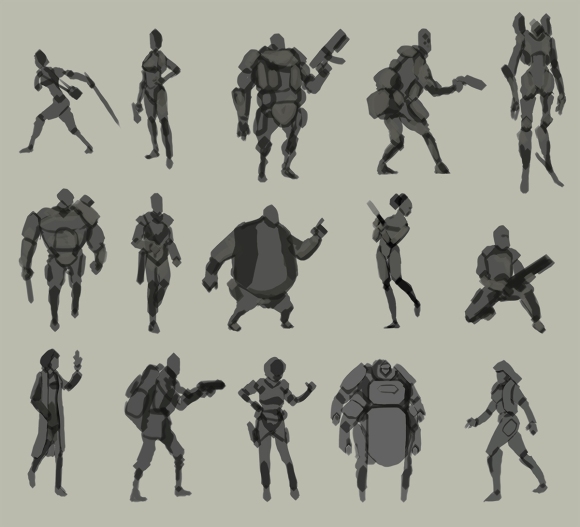 OH, I know you might consider this sexist.
But if you think there is ANY connection between the fantasy world of zombies, space cruisers or pinup girls and reality… well… no. Not really. 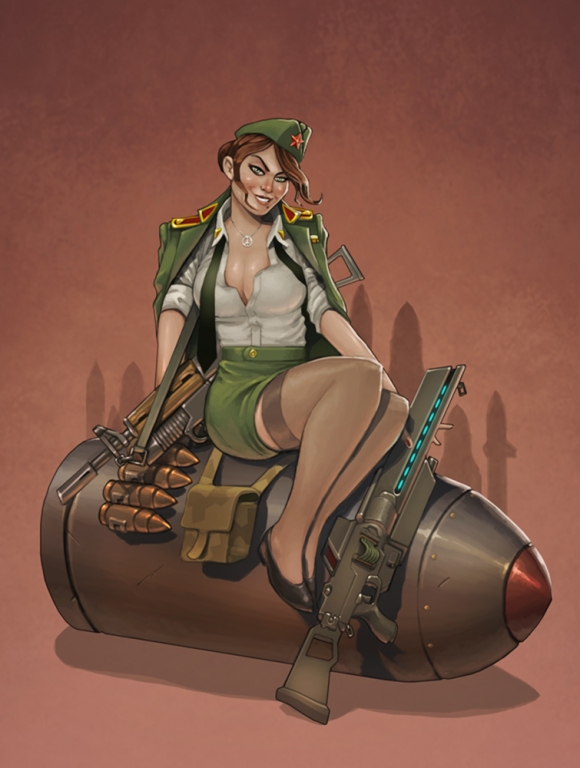 For years I’ve been really unhappy with my art. I’ve been looking at artworks, both traditional and digital and got angry at myself for my lack of progress and most of all my lack of focus.
I looked at higly complex drawings and paintings and got downright mad at myself for not coming up with the focus to work for hours towards a goal that I definitely have floating around in my mind.
But at some point, I lost focus and I started again.
The problem is that as artist in the entertainment industry I am influenced by ideas creeping into my head based on market logic. Certain artistic styles are predominant and more “wanted”, in the gaming field these are mostly highly complex, detailled, naturalistically rendered works.
So isn’t it logically to train yourself and overcome your “laziness” to deliver that kind of demanded art?
Not exactly. You should use your thinking, your character, your strengths AND your weaknesses to improve your art.
I started pursuing a reduced, exaggerated, non-naturalistic artstyle because it delivers quick results
and doesn’t afford me to painstakingly render every single ring on a chainmail.
My lack of focus and “laziness” made sure of that. But it’s no problem.
Instead of hitting myself for my lack of skills in hyperrealism, I learned to love my strengths in
reducing designs and achieving quick results. And, no surprise, the industry loves quick results.

And there will always be a niche for any art that is made with love. Even on the capitalist market.
Just focus on what you really feel like doing and maybe, just maybe occasionally hit yourself. It’s ok.
Just don’t get lost in self-loathing for not being the next hyperrealist rpg illustration master.
Because there are a couple of them out there doing deliveries. What the world needs more is artists that pursue their own crazy ideas using their own tools in THEIR OWN GOOD TIME and share them with the world.

This is a piece of illustration I did in a really short time because I needed some fun (quick painting results) and which led me to writing this blogpost.

This post needs to be viewed listening to THIS ! 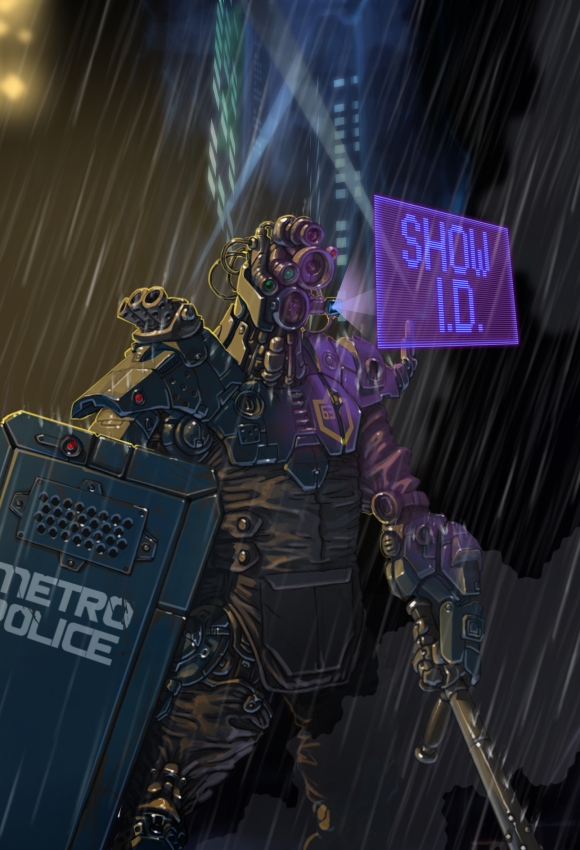 In the year 1997, as a response to increasing crime and chaos,
the metropolitan police replaced all human personnel with android law enforcers,
equipped with superior strength, surveillance capabilities and unbreakable will.
The police force calls them Cybernetic Response Units or C.R.U.s.
On the Streets they are called…

“A well regulated Martian Militia, being necessary to the security of a free Mars, the right of the Martian people to keep and bear Arms, shall not be infringed.”

A 60 minute piece of work based on a simple pencil sketch.
The naked guy serves as a mannequin for various equipment and attire concepts. 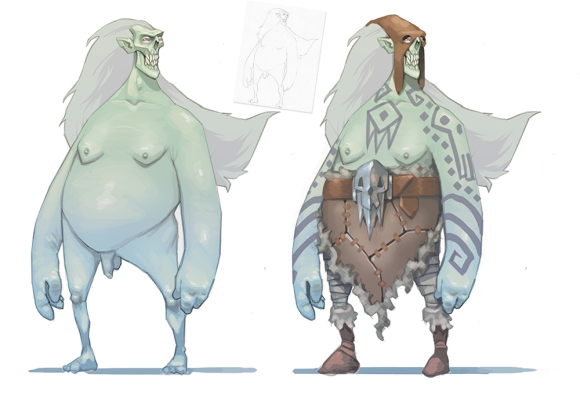 Some illustration and layouting work for a private cardgame project
about knights, knights and more knights. 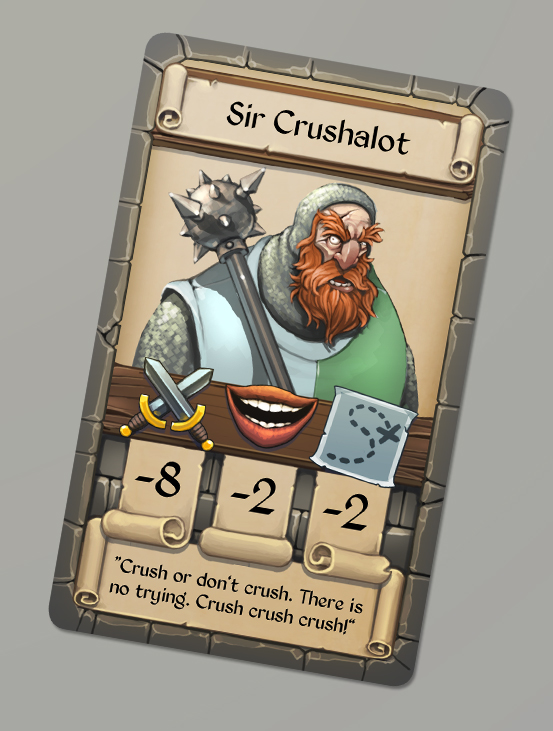